On April 26th 2015 Martin Water’s exhibition In Memoriam: Reflections on War closed and the following week we set to packing up the artworks along with some 50,000 poppies.

Big thanks to Martin and the Dean Clough team for enabling me to work on such an interesting and timely show! 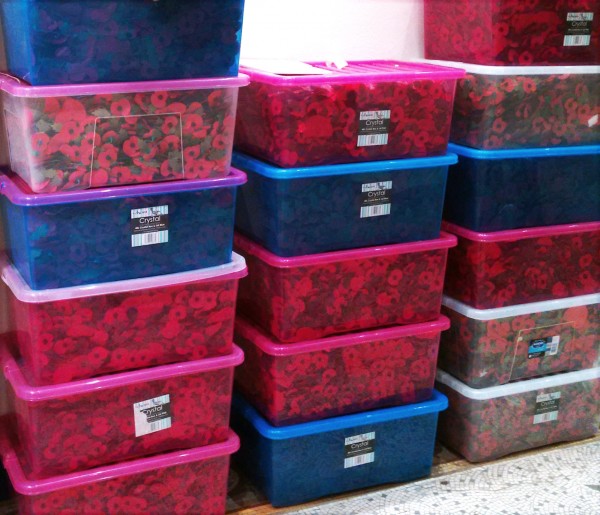 It’s going to be a busy week  at Dean Clough for the gallery change overs. 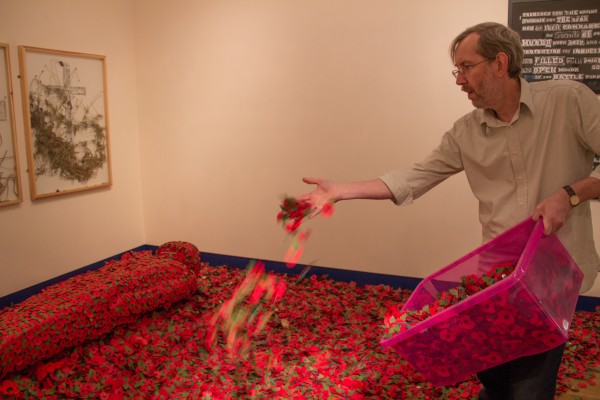 Today the installation of In Memoriam went smoothly, Martin Waters was on hand to scatter poppies…

A spot of guest curating… In Memoriam: Reflections on War, an exhbition of works by Martin Waters

In recent  months I have had the pleasure of working at Dean Clough Mills, Halifax, on a number of creative projects. One of those projects has been the curation of In Memoriam: Reflections on War, an exhibition of works by the Hull artist, Martin Waters.

‘MARTIN WATERS (b. Hull, 1955) first showed at Dean Clough during his tenure as the official artist at Spurn Point – when his work, based on found pieces, excited much comment and acclaim. He returns with this extensive show of installations and ‘tar paintings’ that reflect on the horrors of war and which examine our shared notions of remembrance and the need for commemoration.
While the installation of ceramic poppies at the Tower of London might have excited the media in 2014, Martin’s own use of poppies in his work began long ago when he discovered poppy wreaths that had been washed up on the shores of Spurn Point. His initial installations that contemplated the effects of conflict – not only on the participants but also on their friends and relatives – were actually inspired by his father’s memories of the Normandy Landings.
Inevitably the ongoing centennial of ‘The Great War’ has led to an extension of Martin’s practice, with travels to memorial sites around the world and donations of war relics and associated stories. It would be hard to imagine a more suitable or welcome candidate to mark Dean Clough’s participation in the national series of commemorative events’.

The preview of In Memoriam: Reflections on War is on the 17th January 2015 noon-2pm. Refreshments will be provided, no RSVP needed, all welcome, we hope to see you there!

In Memoriam: Reflections on War runs from January 17th to April 26th 2015.